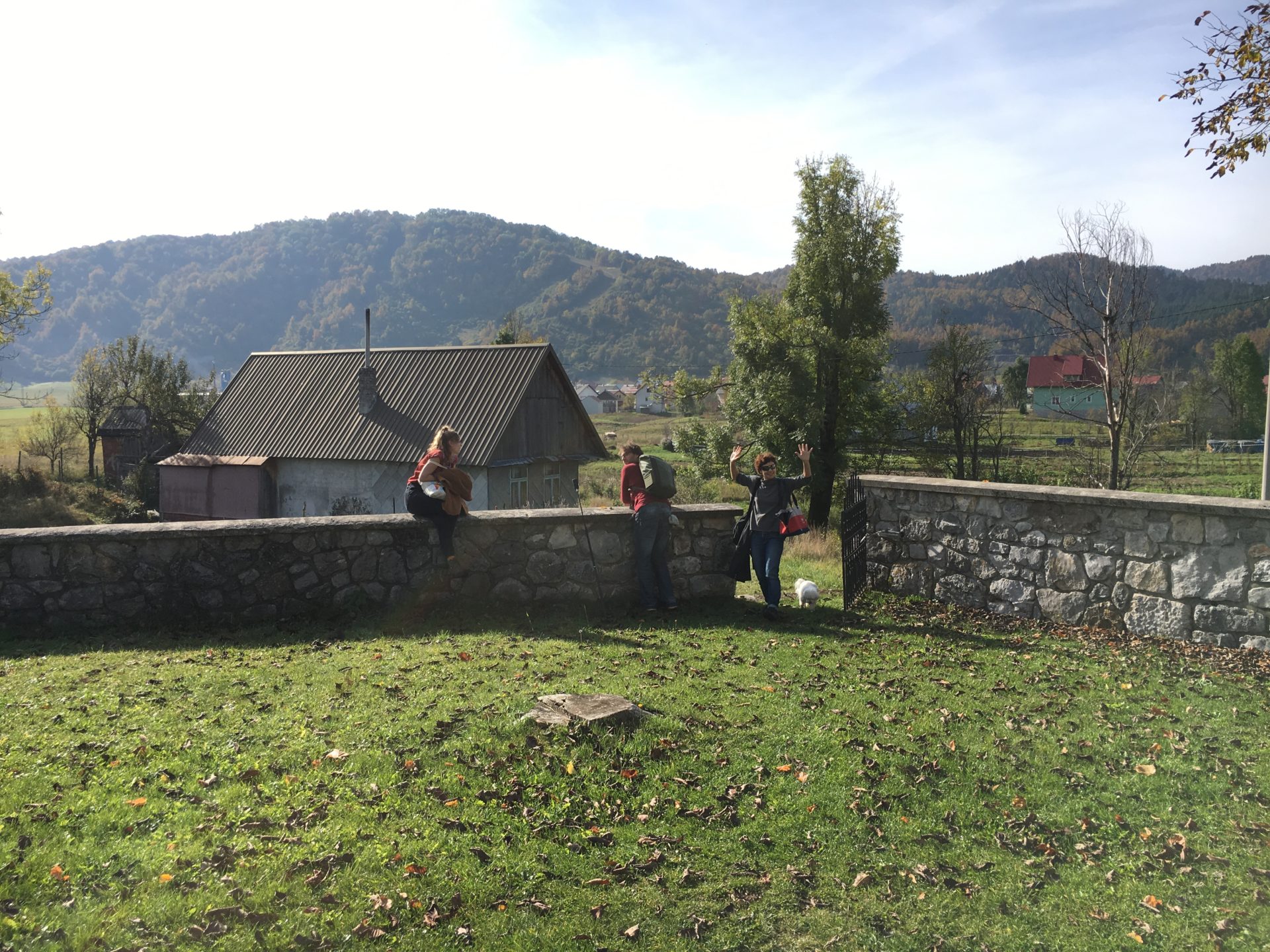 Posted at 11:31h in Colum by Hoge Fronten

A story about our first residency in Mrkopalj

On a sunny Sunday in October, Lieke, Jolle en I leave the Netherlands for a village in Croatia with a very difficult name to pronounce. The village with seven hundred habitants and a few streets, is called Mrkopalj. It means dark field, which really speaks to my imagination. It is surrounded by mountains, forests and wilderness. Tajči Čekada, the artist from Croatia, was already waiting for us when we arrived.

The village has one lost hostel, were we are taken to. The hostel is a skiresort, and is located on the bottom of a ski slope. There is no snow. And although there used to be snow around here for ten months a year, local people are worried it won’t be snowing at all this year. Mrkopalj is known of its ski possibilities, but in recent years there has been less and less snow. The climate change is also present in Mrkopalj and has an influence on the whole village.

The hostel is empty, we are the only guests this week. The woman responsible for the hostel gives us the key of the front door and wishes us a pleasant stay.

Next to our hostel is a wood factory, which is run by two woman. They are processing wood in the factory day and night. The chimney is smoking endlessly. From up the ski slope it looks like half the village is wood and the other half houses and land.

We can have breakfast, lunch and dinner at restaurant Tilia, the only restaurant in Mrkopalj. It is located next to our hostel. A woman in a shirt with a big owl on it, walks slowly and nervously towards us. Tilia is a meat restaurant and the woman never cooked vegetarian and vegan before. Days before we arrived she was panicking what to cook without meat, milk, eggs and fish, which are usually her main ingredients. I feel guilty. A little bit unsecure she serves the most delicious vegan Croatian dishes, including desserts. She cooks the best vegan food ever. After two days we call her ‘mama’. After six days we all are three pounds heavier.

On our second night in Mrkopalj we are in the woods with hunter Josip, a man we met the first night in the local bar. My mother always learned me never to go into the woods with a stranger, and certainly not when he has a gun with him. But I am very glad we did step into his car. Josip was our door to Mrkopalj.

In the woods we are waiting for a mother bear with her cubs. We are waiting in silence. Or at least, we try. We hear branches cracking. We hear heavy footsteps. We hear leaves rustle. It is exciting. We whisper enthusiastically to each other when we think we hear something or when we think we see something. When the dark falls, a mother bear with her three cups appear. For hours we listen how the cubs are crushing corn between their teeth.

We are only in Mrkopalj for six days to do research and take the first steps in our collaboration with Tajči. Six days are longer than I thought. And although we had no schedule at first, we met so many people who invited us over, our week was quickly full of appointments. The village welcomed us with open arms. Everybody wanted to show us around, show us proudly their Mrkopalj. We met a local choir, who sang a few songs specially for us in the local church – which was wonderful, so beautiful. The local elementary school welcomed us with a song and a poem, an ode to Mrkopalj. A woman took us to her land in the wilderness, where we picked up mushrooms, drank berry wine and listened to her stories. We went to a tamburaci rehearsal, an orchestra of guitars played by the youth and young people of Mrkopalj. We were welcomed with wine and beers. Everywhere we came, we were welcomed with food and drinks. And although people warned us for the stiff and somewhat closed attitude of the villagers, I have never felt more welcome in a place before.

After six days we knew a lot about Mrkopalj and the people living there. We made a good start. We made friends. We met a lot of people. And we were already looking for houses. But we also had a lot of ideas to work further on. The first seeds were planted. Not literally.

Villagers told us how young people leave Mrkopalj, to live in a bigger city. Only a few people return. We had to leave Mrkopalj too. But we will definitely return. Hopefully in the winter, to take the next steps in our making process for the performances in April.